What are complex systems? Look around, and you will find them everywhere; in the city’s traffic, stock and finance markets, the nature around us and even our relationships at home and work!

Complex systems are those systems that are composed of many interacting sub-systems, having non-linear heterogenous constituents and inter-dependent relationships. They are termed complex as they have very intriguing dynamics, with many components across multiple scales- both temporal and spatial. Their collective behavior can be quite different from the dynamics of individual subsystems in isolation, or they can have unpredictable outcomes for simple perturbations.

Is understanding complex systems complex? How does one study them?

ICTS’s Summer School in Dynamics of Complex Systems addresses these exact questions. The Summer School is an annual program held between May and July, and has been organized at ICTS-TIFR, Bengaluru since 2016. It generally comprises of a two-week course, followed by an opportunity for a few selected participants to work on short-term projects, mentored by experts in the field. The program concludes with a week-long discussion meeting, where the researchers share their research proposals and plans. The program aims to help equip and update young students and scientists with advanced methodologies and open problems, using its hallmark interdisciplinary approach.

The previous editions of this program have focussed on studies of the atmosphere and the oceans (2016), different biological systems (2017), and engineering sciences (2018). This year the theme of the program was social sciences and economics, and the first of its kind to be organized in India.

The diagrams below schematically represent two separate complex dynamical systems having interacting subsystems. For convenience, scientists and researchers represent these sub-systems as a set of nodes, with edges (lines) running from one node to another. Each edge represents a relationship/interaction that occur among the sub-systems within the complex system. 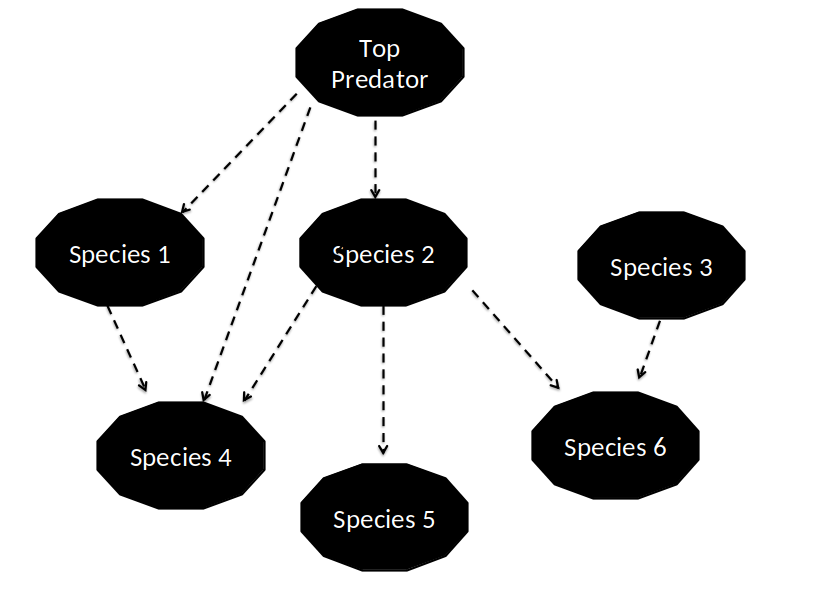 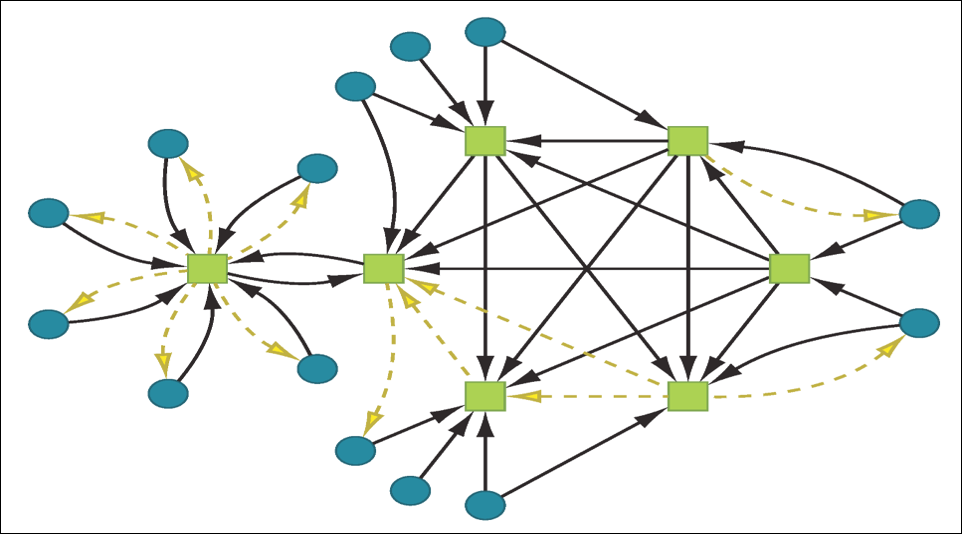 Diagram A represents the feeding relationship between a top predator and other species in a food-web (an ecological network). Arrows show the direction of predation (predator to prey). Diagram B is a schematic diagram of a banks (

) network, with connectors being either loans (

Humanities and social sciences involve the study of functions and activities of humans in the wide setting of societal structure, environment and their cognitive landscape. For example, decision-making under options, evolution of languages, crowd management, financial stock markets, etc., all require interplay between both the individual and the collective for its outcome. These studies require theoretical understanding of the way in which societies evolve and develop - including their social structure, interactions and dynamics. In addition, the knowledge to decipher the ways in which people use technology and its role in their decision-making processes is also necessary. Analyzing such systems and associated large amount of data requires the use of specialized theoretical and computational methods, which are not usually a part of the curriculum of courses in social sciences or humanities, that are commonly offered in colleges and universities in India.

The ICTS program Dynamics of Complex Systems 2019 (DCS2019) provided a platform for interdisciplinary interactions between social scientists and theoretical/computational scientists. The initial two weeks of the program was a Summer School conducted between 15-31 May 2019, and consisted of lectures and tutorials to introduce the participants to different techniques and methods such as, game theory, genetic algorithms, networks, agent-based modeling, time series analysis, etc.

William Rand’s (North Carolina State University, USA) lectures were on the theory of agent-based models, and their implementation using NETLOGO - a widely used software that he helped co-develop. Using flocking patterns of birds, as an example, he explained how simple rules followed by agents can lead to complex spatiotemporal patterns. During the tutorials, Rand also mentored the participants in using simulation and theoretical arguments, to carry out complexity modelling. Shankar Prawesh (Indian Institute of Technology, Kanpur) gave a special lecture on the design of news recommendation as a complex adaptive system. 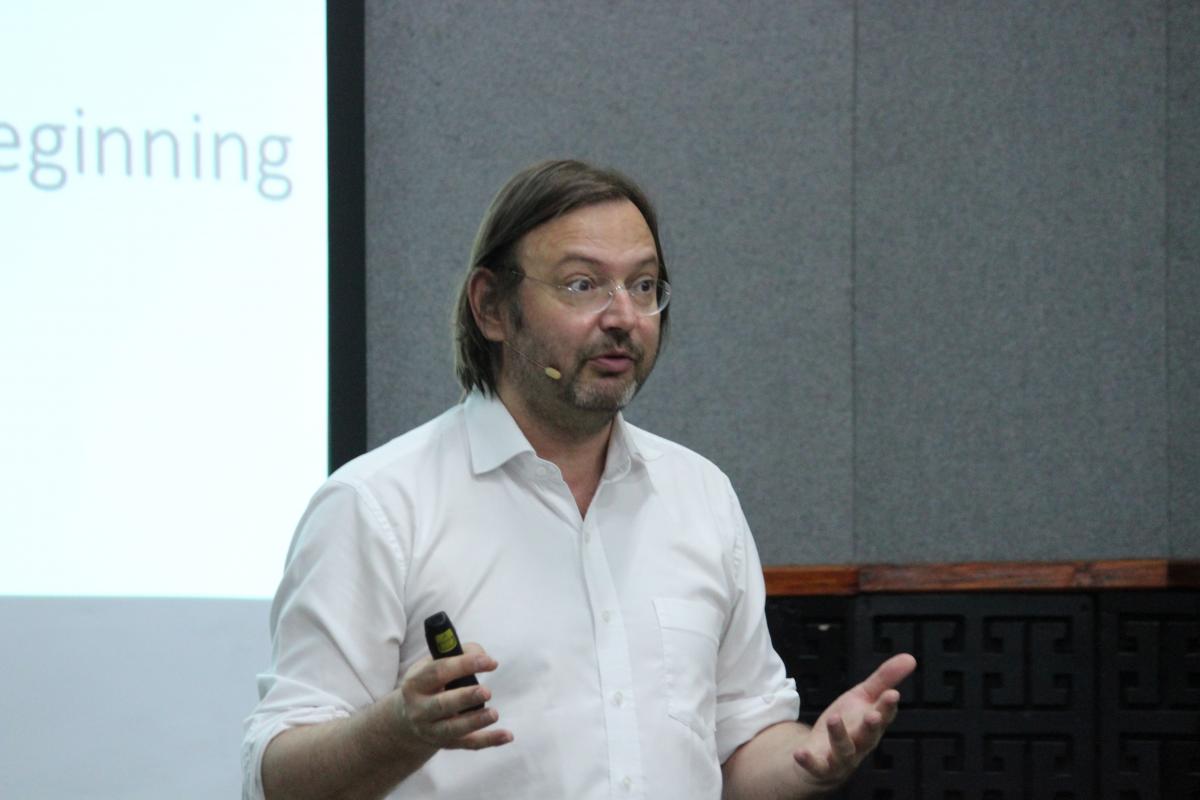 Stefan Thurner speaks about his work on dynamics of complex systems at ICTS’s public outreach program, “Kaapi with Kuriosity”. The talk can be accessed on our YouTube Channel.

Like the previous editions, this year too, the program was received with great enthusiasm. As an emerging field in Indian science, Sunil Kumar believes, programs such as these give students in India, an opportunity to get trained and mentored by experts from all around the globe. “It also provides researchers across different research fields an opportunity to meet and exchange ideas”, adds Ashish Kumar. 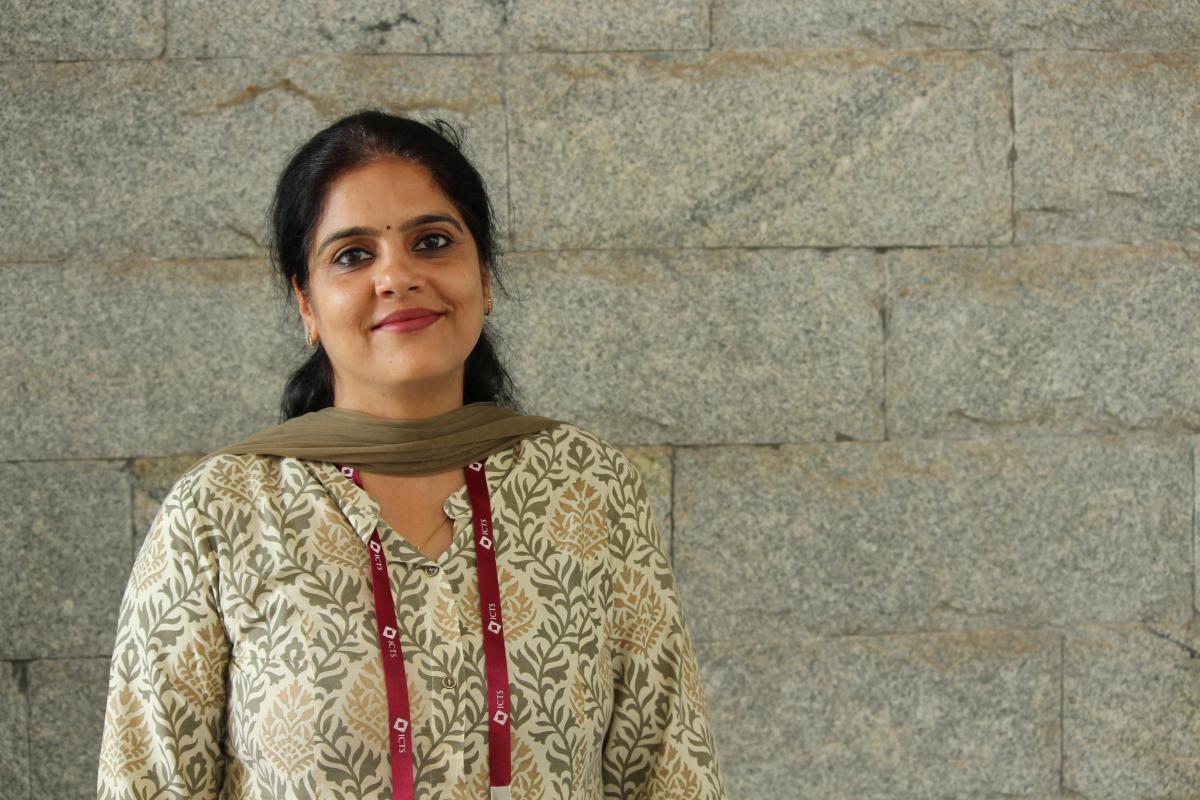 “Interactions with other participants from such diverse backgrounds has helped me to understand the scope of the field”, said Dr. Priya Gupta, a participant from Delhi University.

This year, three participants were chosen to work on short-term projects under the mentorship of Anibaran Chakraborti (Jawaharlal Nehru University, New Delhi) and Somdatta Sinha. Adarsh Prabhakaran’s (Indian Institute of Science Education and Research, Mohali) project involved using agent-based models to study biodiversity problems using a prey-predator system. Ashish Kumar (Ashoka University, Sonipat) examined the links between economic complexity (based on production and trade networks) and financial networks for various countries across the globe. Sunil Kumar (Ramjas College, Delhi) used methods, such as the random matrix theory and complex network theory among other concepts from theoretical physics, to identify patterns in financial stock markets and other social phenomena. All three long-term participants presented their work in the discussion meeting held at the end of the program. 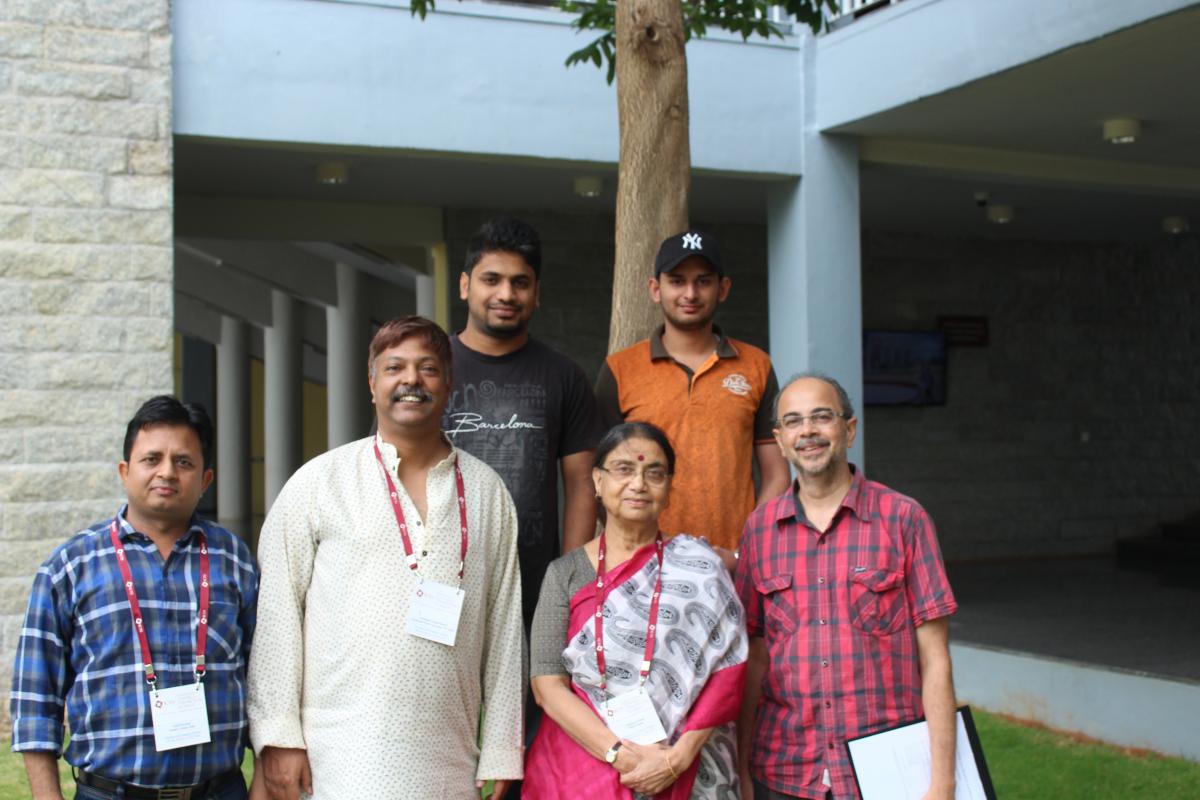 “Studying complex systems using interdisciplinary methods is not new. It is being done for the last few decades. But recently, studies in these fields have started to pick up, especially in India. In fact, the term Econophysics was used for the first time at an international conference in Kolkata. Also, Indian scientists have made significant contribution to the field in the recent years”, said Anirban Chakraborti. The organizers are thrilled at the positive responses of the participants and hope to re-create the magic again in the future editions of the program. “We believe this program will not only help equip students and early career scientists from different fields, in learning skills required to carry out good research, but also enables them to incorporate theoretical methods in their course syllabi for future generations”, said Somdatta Sinha, one of the organizers of this summer school. 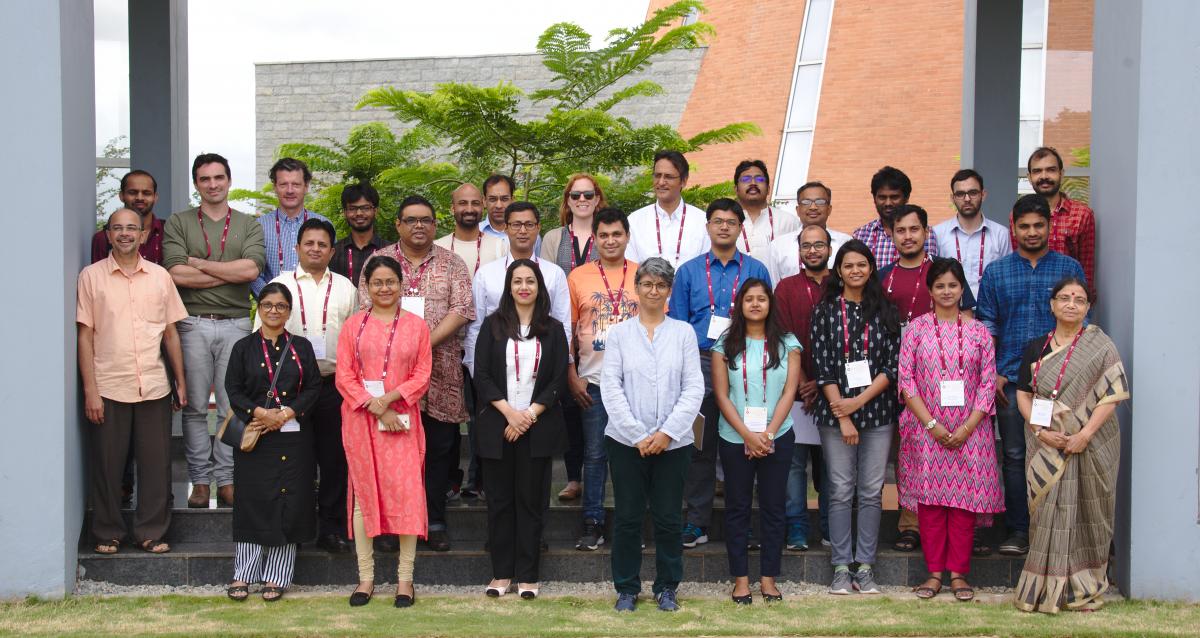 Participants of the DCS2019 discussion meeting

The DCS2019 concluded with a discussion meeting, held between 8-12 July 2019. This meeting was attended by forty-two participants comprising of researchers, faculty members and PhD students, actively involved in studying complex systems in areas such as, Economics, Finance, Sociology, Anthropology, Computer Science, Statistics, Econophysics, etc. It was a platform to facilitate interactions between experts and participants. Focus of the talks was on application of different mathematical and computational methods, including developing newer approaches, to study real problems in Economics and Social Sciences. Rajiv Sethi, Andreas Wimmer (Columbia University, U.S.A) and Eleanor Power (London School of Economics, U.K), were among the invited speakers. A panel discussion was also held to discuss the way forward and plans to further research in the area. 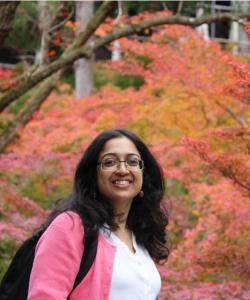