ICTS and its Role In Indian Science

"If we neglect nurturing path-breaking ideas in basic sciences, we will not be able to radically innovate in the future"

An alumnus of IIT-Kanpur, Prof.  Rajesh Gopakumar, Centre Director ICTS, was invited to deliver a talk at the pan-IIT Bay Area Leadership Conference 2019, on 15 July 2019, at Santa Clara, CA, USA. In his presentation titled, ‘Blackholes, String Theory and Algorithms’, Prof. Gopakumar not only described how advances in science and technology had enabled scientists to image the blackhole in the M87 galaxy, but also spoke about the importance of promoting research in basic sciences in India, as well as ICTS’s potential to grow as a world-class research center and make significant contributions to global science. Here is a summary of his talk.

Earlier this year, an international consortium of scientists, revealed the image of the blackhole at the centre of M87. It is a remarkable breakthrough, as it was for the first time that a blackhole had been `photographed’ since Albert Einstein predicted its existence in his theory of general relativity, more than a century ago.

Supermassive blackholes are located at the centre of galaxies. Our very own galaxy, the milky way, is centred around a blackhole which has a mass that of 4 million suns. Black holes  are fascinating as their gravitational field is so strong that even light cannot escape it. Therefore, imaging a blackhole (or rather the extreme environment around it) is no easy task. So, how did the scientists manage this feat? Why did it take them so long to do it?

The blackhole M87 has a mass equal to 6 billion suns and is 53.49 million lightyears away from earth. But imaging it from earth is like for example, reading a newspaper in Kanyakumari sitting in Kashmir - you need extremely high resolving power.  Using radio imaging techniques, scientists attempted to map the extreme environment that exists around it. The Event Horizon Telescope, a network comprising of radio telescopes placed at multiple locations - Mexico, Spain, Antarctica, Chile and Hawaii and Nevada in USA, collectively measured a sparse image: like having a few pixels of a big picture. Combining some smart new algorithms with traditional signal processing, an image of the blackhole was rather remarkably reconstructed from this sparse data. These kinds of techniques can be applied to much more mundane tasks on perhaps even our smartphones in coming years. 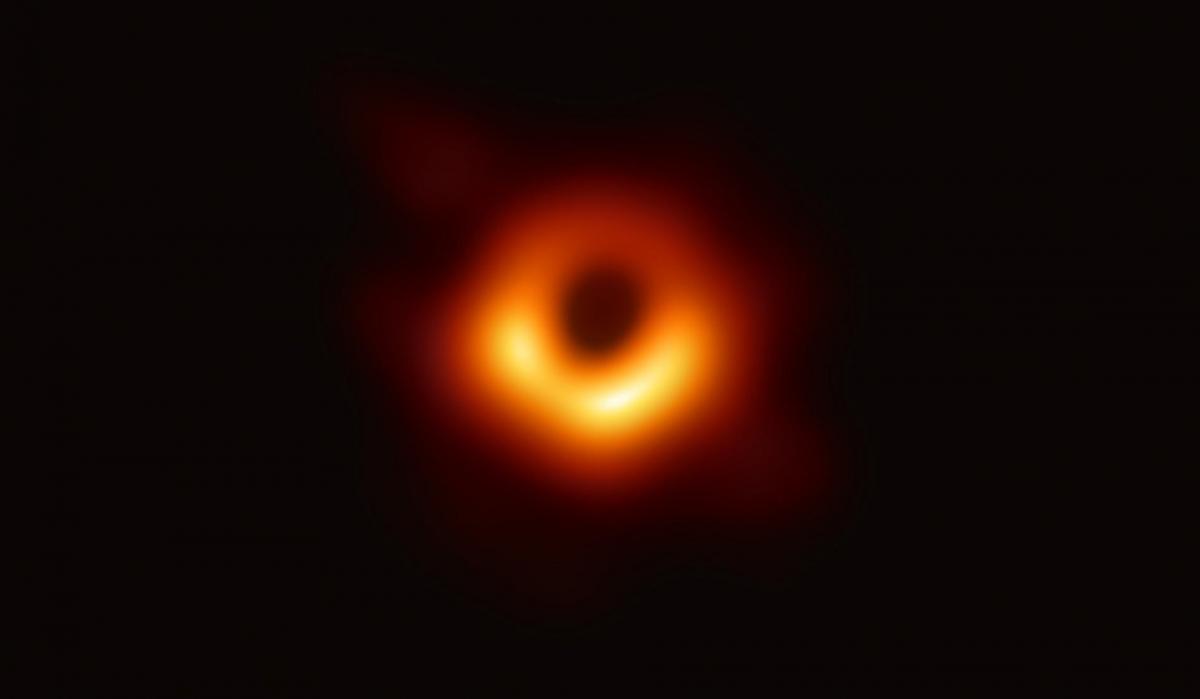 The first image of a supermassive black hole and its shadow. The image reveals the central black hole of Messier 87, a massive galaxy in the Virgo cluster.

Scientists, at ICTS are actively exploring questions, that connect the geometry of Einstein’s theory with ideas from quantum computing and quantum information.

But progress doesn’t stop here, as every seminal advance in science opens a. whole new chapter. In recent years radical new ideas about the nature of quantum spacetime connect with modern developments in quantum information and algorithms. Stephen Hawking had the insight that when one combines quantum mechanics with Einstein’s theory, blackholes emit radiation and evaporate. This is a puzzle, as this featureless thermal radiation appears to have destroyed all the information, which was initially present in the matter that created the blackhole. Developments in string theory have thrown up many fascinating ideas, on how perhaps the geometry of space and time reflects the flow of quantum information. That perhaps the quantum bits that make up a blackhole, can be entangled to creating wormholes in spacetime or more generally that it might be quantum entanglement that holds quantum space time together. Scientists, including those at ICTS, are actively exploring these questions, which connect the geometry of Einstein’s theory with ideas from quantum computing and quantum information.

Where does all this lead to and why should one care, one may wonder?

For a very long time, physicists across the globe have been working towards developing more and more powerful quantum computers. However, advances in research are hindered by many challenges, in particular, that of keeping error rates under control. Quantum space time might be a robust quantum error correcting code, scientists believe, and can perhaps provide insights on improving the performance of future quantum computers. These ideas are therefore being taken seriously by entities like the US dept of defence and Google-X.

Research in basic sciences has always led to these kinds of novel ideas coming in from left field and this needs to be continually promoted and encouraged, especially in India. Because, without ‘Discover in India’ or’ Invent in India’, there cannot be a ‘Make in India’ (to quote David Gross, chairperson of ICTS’ International Advisory Board).

ICTS has been established with the vision of providing scientists the stimulating environment that is necessary to carry out world-class research.

ICTS has an important role to play in nurturing innovative scientific research in India. It has been established with the vision of providing scientists the stimulating environment that is necessary to carry out world-class research. In recent years, ICTS researchers have often been in the spotlight. For instance, in the context of the present talk, Dr. P. Ajith and his team have played a critical role in the LIGO (Laser Interferometer Gravitational-Wave Observatory) collaboration which detected gravitational waves in 2015 from the collision of a pair of stellar black holes. The ICTS team helped in testing Einstein’s theory as well as in the determination of the mass of the black hole from the data.

This is just a case in point of the potential Indian science has in making a global impact and in the future, ICTS will have a major role to play in contributing to global science. To build such a world-class institution needs resources and ICTS also looks to civil society to ‘Partner in Excellence’ to make this happen.

Click here to view slides and the complete video of this talk.