The observations of binary black hole and binary neutron star mergers by the LIGO and Virgo gravitational-wave detectors have already revolutionized the fields of astronomy and astrophysics. India too has an established and thriving community of researchers working in the field of gravitational-wave physics, and with LIGO-India scheduled to come online in a few years’ time, it is very important for young researchers to stay updated with cutting-edge methods of this science.

The ICTS School on Gravitational Wave Astronomy is an annual program organized by Prof. Parameswaran Ajith (ICTS), Prof. Bala Iyer (ICTS) and Prof. KG Arun (Chennai Mathematical Institute). Due to the tremendous and positive response received from the research community since its inception in 2013, the program has hence become a permanent fixture of the calendar year at ICTS. The school generally tends to have a broad theme every year in line with frontier areas of the field, like numerical relativity, neutron stars, gravitational-wave data analysis and astrophysics with gravitational waves. Over the years, the recorded lectures and tutorial sheets from the school have become a very useful reference for the international gravitational-wave community.

This year's edition- seventh in the series, the school was held between 15-28 July and focussed on  theoretical modelling of some of the promising astrophysical and cosmological sources of gravitational radiation. The school involved four research-level courses, with five lectures each, delivered by eminent scientists from around the globe. Around 50 participants from universities and institutes across India and abroad participated in this two-week program that had lectures during the morning sessions and rigorous, hands-on problem solving sessions in the afternoon.

The school was kicked off by Prof. Sudipta Sarkar (Indian Institute of Technology, Gandhinagar), an expert in both the classical and quantum aspects of gravity. He delivered a set of advanced lectures on Einstein’s General Theory of Relativity. These lectures helped to set the stage for the topics to be covered in the courses that followed, including an in-depth discussion of the properties of spinning black holes, as well as the derivation of the wave equation in linearized general relativity.

The second week of the school saw Prof. Luc Blanchet (Institut d'astrophysique de Paris, France) and Dr. Adam Pound (University of Southampton, United Kingdom) deliver lectures on their respective research fields. Prof. Blanchet spoke about the post-Newtonian approximation to General Relativity of which he is a pioneer. The post-Newtonian approximation is an inseparable part of gravitational-wave compact binary source modelling for LIGO, and Prof. Blanchet systematically introduced the participants to the subtle aspects of the calculations. He concluded his lectures with a discussion on regularization techniques to take care of the non-physical ‘infinities’ that one usually runs into while doing these calculations.

Dr. Adam Pound is a world-leading expert on the self-force approach to modelling compact binary systems. An inspiralling binary system where the mass of one object is much greater than the other is called an ‘extreme mass-ratio inspiral’, and the usual methods that we use for modelling inspiralling systems fail miserably in these cases. The failure can be traced to non-inclusion of the radiation reaction effects, which is exactly what the self-force approach accounts for explicitly. Dr. Pound walked the participants through various aspects of the problem, using the method of multiple scales and other techniques, to solve the equations up to second order in the perturbation parameter.

The organizers are thrilled by the positive feedback they have received by both the participants and the speakers. “These schools have already made a tangible impact on gravitational-wave research in India. While graduate students have a unique opportunity to get trained in the cutting edge methods, these schools also attract a lot of smart undergrads to this area. At least a dozen undergrads who participated in previous schools are currently working with world-leading research groups. This is an important step towards growing the Indian gravitational-wave community”, says Parameswaran Ajith.  “The response to these schools has been overwhelming -- both from within India and from abroad. Each year, we are able to admit only a fraction of the interested students. Luckily, all the lectures and associated material are archived for the benefit of the wider student community”, he adds.

The videos and lectures of this program and related topics are available on our YouTube Channel ICTStalks. 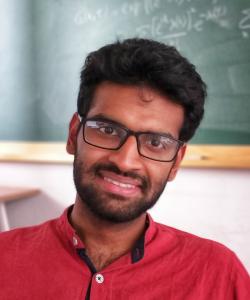 is a graduate student at ICTS